Awwww, I messed up!

Okay...so the moly exchange stuff is going awesome...I got into the first exchange that I really wanted, Monsters, woo-hoo, and then I started my own theme, Wonderland. (Did my links work this time? Hope so). Anyway......I got so excited about starting these exchanges that I jumped in too fast, I think, hee hee, and instead of concentrating on one book at a time I started two at once. What I should have done is worked out all the stuff in the Monster book and then moved on to the Wonderland stuff, however that did not happen. I started them both at once, sketching in one then the next one, then inking one and then inking the next one...So my entry in the Wonderland book is done, see the previous entry for picture, however when I got to the color portion of my monster book I had a brain fart and fudged it up! Dammit!! So last night, I spent the evening trying to fix my major blooper....and to be honest it wasn't that bad...where I had used colored pencil with Wonderland, I used ink pens with the monsters and I just plain didn't like it. I wasn't happy with the colors or the technique I was using and I wanted to start over, however there are 10 artists involved in the monster exchange and so my pages are limited, I am not to exceed three pages, so I had to go over what I already had. How in the hell to do that, hmmmm? So I used some india ink and watercolor and painted over the top of my pages. It's definitely a night scene now, hee hee. I re-drew my characters on watercolor paper and will attempt to glue them down over the tops of my flub :) Hopefully that works because at this moment in time I'm not sure how to fix mistakes in the molies.

So here's the moly with the background re-painted. At this point it's still missing one of the monsters and you can't see some of the curly-swirly night wind I've going but this is as good as it gets for now :) More to come later.

can't wait to see your monster pics. are you posting them tonight? 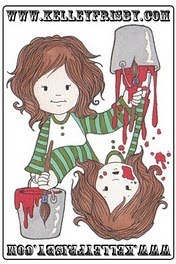